Bundanoon could have been called South Lambton, Barren Grounds or even Jumping Rock, all local names from as early as 1838, but when the railway route to Goulburn was taken through ‘Jordan’s Crossing’ in 1868, the name stuck. Until then, the area had been mostly farms and orchards. It had been explored in 1818 by Charles Throsby who , with the help of Aboriginal guides, found a route down to Jervis Bay from Marulan.The site of the present village of Bundanoon had been a meeting and trading place for the Wadi-wadi and Gandagara peoples. Early European settlement was more around Sutton Forest and south-west on the road towards Goulburn. After the passing of the Land Act of 1861, selectors began taking up land towards present day Bundanoon. Development followed the construction of the railway line, as the area had supplies of coal, freestone and timber, all necessary for that work. Over the years there were two coal mines established in the Gullies and at least three timber mills sourcing timber from the Gullies also. The sandstone quarry between Bundanoon and Penrose supplied sandstone for many prominent buildings in NSW and is still operating. By 1870 the Primitive Methodist Church was established on the corner where the Soldiers’ Memorial Hall now stands. This building also served as the first school, with Mrs Dinah Osborne as teacher. A new school of two rooms was built in 1880 and is still used as the school library. The Primitive Methodists moved to a new building in 1885 (now the Uniting Church) and leased the original site to shop owners. In 1879, Holy Trinity Anglican church was built on its present site. (the timber church was destroyed by bushfire in December, 1904; rebuilt in stone in 1905). St Brigid’s Catholic Church was built in 1895; prior to that, Roman Catholic services were conducted at Sutton Forest. 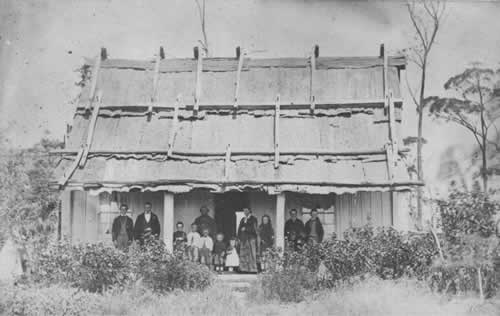 After subdivision of some larger properties the resultant village was officially named Bundanoon in 1881. Bundanoon was the name the first inhabitants, the Gundungurra people, used to describe the deep and spectacular gullies that so typify the landscape surounding the present day township. Shops and other businesses sprang up along both sides of the railway line. Erith Street was once home to various shops, as Ellsmore Road was the main road to Sutton Forest. The first licensed hotel, the Commercial, was in Erith Street next to the present hotel (built in 1922).  Early settler and benefactor, W.A.Nicholas, manufactured his ‘Golden Cross’ brand powders and potions in the building known as “the pill factory” in Anzac Parade (since used as a guest house then a  restaurant/motel). Guest houses and tearooms  became popular as tourists from Sydney used the new railway to holiday in the area described as just as scenic and healthy as the Blue Mountains.  During the peak years for tourism, Bundanoon had approximately 68 guest houses, some large, some just the family home catering for paying guests. Attractions included the scenery at Morton National Park (the gullies), invigorating weather, walking, riding, tennis, golf, and swimming in the Paddy’s River. Although some of the buildings are still standing, only a few still operate as tourist accommodation, such as the Youth Hostel. After World War II, as car travel allowed holidays further afield, the popularity of Bundanoon as a holiday haven waned. The beauty of the natural bush in the Morton National Park still attracts visitors and tourism remains a major industry with many new attractions such as wineries, open gardens and Bundanoon’s event of the year, ‘Brigadoon’, when up to 20,000 people flock to our village. These days, Bundanoon is a vibrant, rapidly growing community that has managed not only to retain its village atmosphere, but improve upon it through the enthusiastic involvement of its residents. Several of the old guesthouses have been restored and welcome guests once more. The pleasures of the great outdoors continue to draw visitors, just as they did a century ago.